Travel vlogger Justin Scarred has done the impossible and found the actual filming locations from Wes Craven’s The Hills Have Eyes (1977). The YouTube star incorporated the help of his brother to search out and document the rural California desert locations and produced a 44-minute video of his findings on his popular Randomland Fright docu–series.

Their exhaustive journey and fervent determination paid off and using split screens and shot for shot overlays capture what might be the holy grail of horror locations. What makes this such an important discovery for movie fans is the remote location and repetitiveness of landscape which made it nearly impossible for explorers to pinpoint. Here’s what Justin has to say about his search:

“For two decades I searched and hoped someone would post the filming locations online, but after waiting and searching all this time, I finally found the correct spot, just northeast of Los Angeles, in the Mojave Desert outside of Apple Valley.

This video is the culmination of weeks of searching and returning to the desert multiple times, combing over the mountains and washes to locate the filming locations of the Carter family trailer, Pluto’s dog attack scene, Beauty’s disappearance and Bobby’s search, Pluto’s entrapment, the Rattlesnake Canyon, the Mars Chase scene, Ruby’s revenge and the Baby’s reunion! My brother and I are happy to present the end result of all the blisters and cactus wounds, THE LOST FILMING LOCATIONS OF THE ORIGINAL HILLS HAVE EYES!!!”

The Hills Have Eyes was “officially” shot just outside Victorville California in the iconic craggy desert landscape which has come to signify the uneven California desert in a lot of films.

Craven’s actors, including Dee Wallace (E.T., Cujo), have notoriously said that location shooting was a hellish experience; often filming in120-degree weather during the day and nearly freezing temperatures at night.

Michael Berryman who plays Pluto and has become the literal poster child for the film had an especially hard time since he suffers from many birth defects including the absence of sweat glands.

The cast provided their own make-up because of the limited budget and Wallace has said that the dogs in the film were treated better than their human counterparts.

Despite the MPAA having a fit over some of the graphic violence and at one point giving it an X-rating, The Hills Have Eyes went on to become a great box office success. In 1984 the director re-visited his cannibalistic mutants in the widely panned sequel The Hills Have Eyes Part II.

Of course, the franchise got a reboot in 2006 with Alexander Aja (High Tension, Crawl) at the helm. It got yet another sequel in 2007. 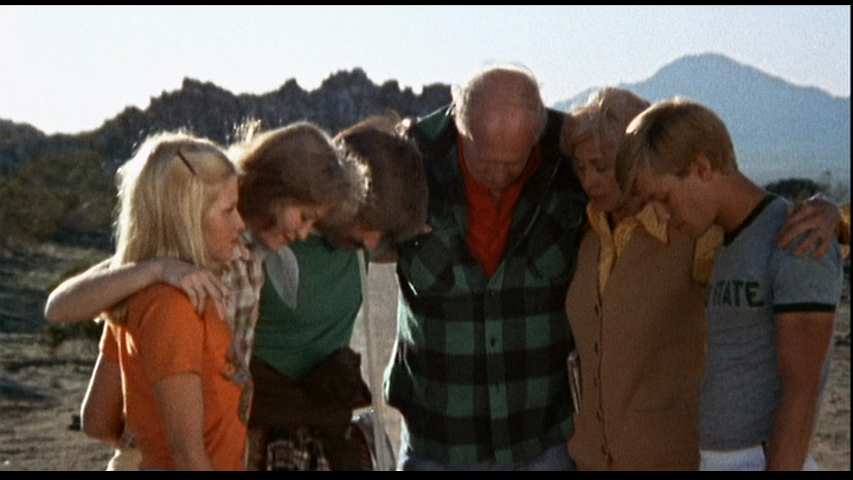 Even though the franchise has become a cult mainstay (there’s even been talk of a mutant origin story) the original is still one of the true horror gems spanning generations.

With Justin’s video documentation of the film’s location that reverence is still in good standing among fans, filmmakers, and American cinema in general. Plus it’s a testament to the actors (and one intrepid vlogger) who endured the extreme elements for their craft and the genre itself.

TRAILER: ‘Horizon Line’ Puts a Couple in Charge of a Runaway Airplane