Vampire House For Sale: It Even Comes With Its Own Hearse

A homeowner in Baltimore, Maryland has caught the internet’s attention after putting his “vampire” house on the market. With an asking price of $225,000 — it’s a real steal, right?

But there is a little bit of a catch. The home has been decorated to look like a gothic vampire set piece. It even comes with a 1972 hearse if you want to go all in.

If a stretch limo for the dead isn’t enough maybe the cemetery-themed bar in the garden will set you over the top.

Inside you’ve got one bedroom and one bath, but what’s more interesting is the decor which includes a black and white color scheme and a weird multi-faceted ceiling mirror in the bedroom.

If you’re hosting a party, guests will enjoy a cremains-colored semi-shag rug, a funeral parlor chandelier, and even a grim reaper sconce reaching out from the beyond.

There’s a coffin resting against the wall and even a wrought-iron spiderweb staircase leading up to the second floor. 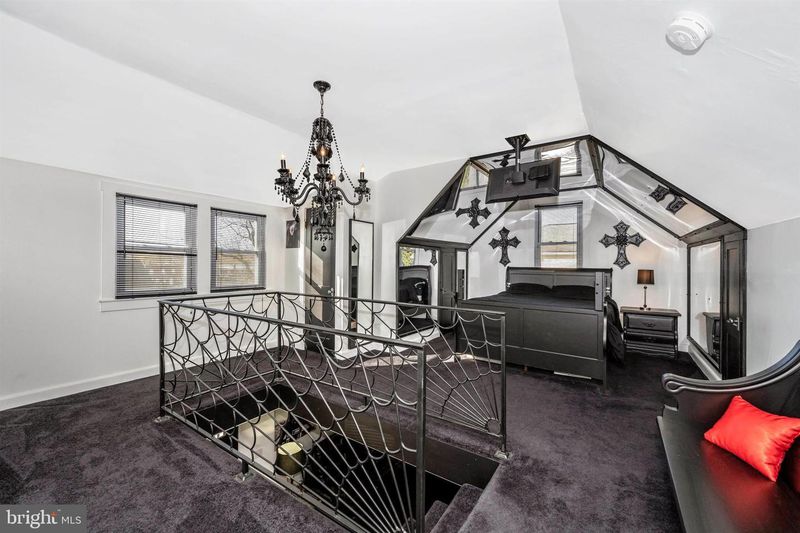 “Everything was off the top of my head. You’re not going to find any place like it,” Billy Nicholson, the 54-year-old seller told the Baltimore Sun. “It’s basically my twisted imagination coming to life.”

He inherited the house from his mother and was inspired to create the ominous theme after seeing some salvaged cemetery gates abandoned by a nearby shop.

Creating the outdoor bar and bar-b-que area with a friend, Nicholson installed the cemetery gates and signposts that read “cemetery” over the handmade stone bar, and “crypt” over the garage.

Nicholson thinks his mother would approve of his design choices because she used to take him to see horror movies as a kid. The love of those movies made him into a collector of life-sized Freddy and Jason mannequins. Those had to be removed at the behest of the real estate agent who thought they might scare buyers off.

The listing went viral after it was posted on Redfin. Some commentators were confused by the funeral home decor and football jersey mashup. Nicholson is a huge fan of the Raiders.

Of course none of this matters because any buyer could change the theme, but it great to know there are people so dedicated to gothic horror they will go out of their way to make it a part of their lives.

Take a pictorial tour of the listing here.