Summer is nearly upon us, and as far as many are concerned, it’s already here. Schools have been letting out and the temperatures have been rising. With this in mind, there’s a good chance you’ll be making a trip to the ocean sometime in the near future. Doesn’t it seem like a good time to revisit Open Water?

It’s hard to believe, but the film came out eleven years ago this August. Oh how the time flies. I don’t get to the ocean that often myself, but that hasn’t kept me from thinking about the events of this film just about every time I do or even imagine being out in its vast expanse.

I’ve loved Open Water since I first saw it. It’s one of those rare movies that, for me, captures a primal form of dread that stems directly from its realism. This could happen to me, and if it did, I would be absolutely fucked.

As a matter of fact, the movie is based on a true story. Most people know that I think, but I wonder how many have bothered to really learn about the events that inspired the film.

In real life, Tom and Eileen Lonergan, a married couple from Baton Rouge, were stranded in the Coral Sea (part of the South Pacific off the northeast coast of Australia) on January 25, 1998. After completing a two-year tour of duty with the Peace Corps. they had been scuba diving with a group at St. Crispin’s reef, which is part of Australia’s Great Barrier Reef. Like in the movie, nobody that was on the their boat noticed that they hadn’t re-boarded when it was time to leave. The captain reportedly indicated that he had a crew member count heads, and that the number was mistaken due to a couple of people who had gotten back out to swim after re-boarding. 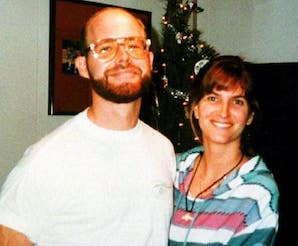 A particularly haunting excerpt from a Wikipedia article on the couple says:

It was not until two days later, on January 27, 1998, that the pair was discovered to be missing after a bag containing their belongings was found on board the dive boat. A massive air and sea search took place over the following three days. Although some of their diving gear was found washed up later on a beach miles away from where they were lost, indicating that they drowned, their bodies were never found. Fishermen found a diver’s slate (a device used for communicating underwater) and wrote down what it reportedly read: “[Mo]nday Jan 26; 1998 08am. To anyone [who] can help us: We have been abandoned on A[gin]court Reef by MV Outer Edge 25 Jan 98 3pm. Please help us [come] to rescue us before we die. Help!!!

There was at one point speculation that the couple staged their own disappearance and/or a double suicide or murder-suicide based on some apparently troubling diary entries, but according to Eileen’s family, these had been taken out of context and dismissed by the family as well as the coroner. Her dad reportedly believed the couple to have drowned or succumbed to sharks, and the boat’s captain, Geoffrey Nairn, was formally charged in their death, but found not guilty. His company Outer Edge Dive Company was fined after pleading guilty to negligence.

A 2003 article from Jason Daley of Outside has quotes form Nairn and the dad:

Nairn, who closed down Outer Edge Dive shortly thereafter, believes that the Lonergans died on the reef. “It was a tragedy, and I’ll never get over it,” he told Outside. “The highest probability is that Tom and Eileen are dead.”

Back in Baton Rouge, Eileen’s father, John Hains, also believes that the couple drowned after being accidentally left behind. “The Australian dive industry wanted to prove that Tom and Eileen faked their deaths,” he says of the disappearance theories. “But the survival rate of being in the ocean with no place to go is nil.”

A story from The Guardian written after the movie’s release says:

Other clues offered tantalising glimpses of what might have happened. A wetsuit of Eileen’s size washed up in north Queensland in early February; scientists measuring the speed of barnacle growth on its zip estimated that it was lost on January 26. Tears in the material around the buttocks and armpit had apparently been caused by coral.

Inflatable dive jackets marked with Tom and Eileen’s names were later washed ashore north of Port Douglas, along with their tanks – still buoyed up by a few remnants of air – and one of Eileen’s fins. None showed any signs of the damage you would expect from a violent end, suggesting that the couple were not the victim of a shark attack, as the film suggests. Experts at the inquest speculated that, drifting helplessly back and forth on the tides in the building heat of the tropical sun, the couple may have been driven delirious by dehydration and have voluntarily struggled out of their cumbersome outfits. Without the buoyancy provided by their dive jackets and wetsuits, they would not have been able to tread water for long.

The Lonergans’ story appeared on both 20/20 and Dateline.

Open Water is a fictionalized version of the events. The characters are different, and even the setting is different with the movie taking place in the Atlantic and being filmed in the Bahamas, the Virgin Islands, the Grenadines, and Mexico.

Kevin Cassell claims to have known Tom and Eileen, and put this video on YouTube to show what they were really like, which according to him, was nothing like the characters in Open Water.

It’s important to remember that Open Water is not a documentary. At the end of the day, it’s a horror movie and a damn effective one at that. Even if the film was not an accurate representation of the actual people the tragic events happened to, I think it does get across the terror of such a situation very well. Of course I’ve never been in such a situation, but I do know one thing. I won’t be taking any scuba diving trips anytime soon, and if I do, there’s no way I won’t be thinking about Open Water.