iHorror | Horror News and Movie Reviews
Home Paranormal The haunting escalates in horror-thriller ‘Insidious: Chapter 2’
Facebook
Twitter
Pinterest
Linkedin
ReddIt
Email
Mix
A haunted family struggles to uncover a terrifying secret that has left them dangerously connected to the spirit world in “Insidious: Chapter 2,” the latest nerve-twisting horror thriller from director James Wan (“The Conjuring”) and screenwriter Leigh Whannell (“Saw,” “Insidious”).
Produced by “Paranormal Activity’s” Jason Blum and Oren Peli, the sequel reteams the cast of the first film, including Patrick Wilson (“The Conjuring”), Rose Byrne (“X-Men: First Class”), Barbara Hershey (“Black Swan”), Lin Shaye (“There’s Something About Mary”) and Ty Simpkins (“Iron Man 3”).
Working individually and collectively, director James Wan, screenwriter Leigh Whannell and producer Jason Blum have been responsible for some of the most influential, commercially successful and flat-out terrifying horror thrillers of the past decade.
In 2004 Wan and Whannell unleashed the groundbreaking and hugely popular “Saw,” which spawned a blockbuster franchise on which Whannell continued to serve as a writer (“Saw II” and “III”) and executive producer. Wan most recently helmed the acclaimed haunted-house tale “The Conjuring,” while Blum has shepherded such blood-curdling hits as “Paranormal Activity” and “Sinister” to the screen. Together, the trio collaborated on the disturbing and original 2011 psychological horror thriller “Insidious,” a micro-budgeted film that became the most profitable theatrical release that year.
Now all three filmmakers are back—along with the entire cast of “Insidious”—with “Insidious: Chapter 2,” which continues the story of the Lambert family’s life-and-death struggle with malignant spirits bent on destroying their lives. 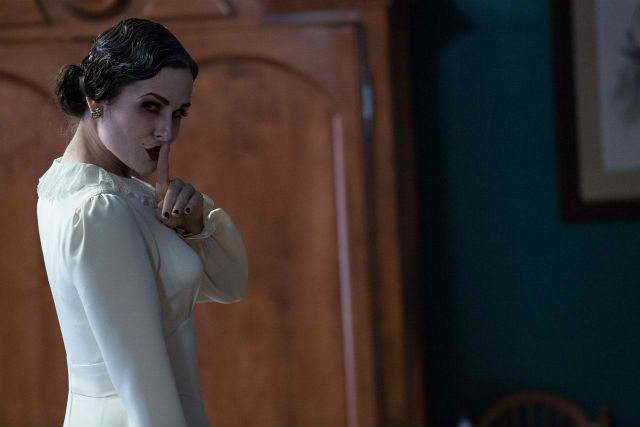 The Lamberts struggle to uncover a terrifying secret that has left them dangerously connected to the spirit world in Insidious: Chapter 2
“We’re super excited at the chance to continue telling the story we started in the first film,” says Wan, who makes his sequel-directing debut. “I love the characters we created in the first film, and it’s great to come back to work with the same cast and crew. It’s like coming home to a family. But it’s also very scary because the success of the first film took us all by surprise.”
“Insidious” centers on the troubles of the Lamberts, a suburban family who leave their haunted house for a new home, only to learn it’s not their house that is haunted—it’s their eldest son. “Insidious: Chapter 2” rejoins the family as they try to put their recent troubles behind them, but discover that the spirits that have tormented them are far from finished.
Wan and Whannell took the unusual step of calling the film “Insidious: Chapter 2” because it picks up right where the first film ends. “Not too many sequels try that, but we loved the idea of creating back-to-back stories,” says Whannell. “You could almost watch them as one movie, or as chapters in the same story. We see Josh murder Elise, but Renai doesn’t see it and she’s not quite sure what’s going on. So at the start of the second film, everything seems back to normal, but slowly you realize something is terribly wrong.”
Opening across the Philippines on Sept. 18, “Insidious: Chapter 2” is distributed by Columbia Pictures, local office of Sony Pictures Releasing International.