About seven years ago a young girl was given an Elsa doll for Christmas. Her family threw it away because it seemed defective, but it has returned on its own. Twice.

Elsa is the main character from the hugely popular Disney animated movie Frozen and its sequel. But this doll doesn’t seem like it’s licensed through The Happiest Place on Earth.

The teal and white doll is cute enough with its kawaii type wide-eyed facial features. It has a functioning accessory; a necklace that, when pushed, plays “Let it Go”; the signature song from the film.

“For two years it did that in English,” mother Emily Madonia told Houston 2. “In 2015, it started doing it alternating between Spanish and English. There wasn’t a button that changed these, it was just random.”

Madonia says the original batteries are still in the toy. She adds that the doll would randomly turn on even though the power switch was in the off position.

Perhaps thinking nothing of it, the family held on to Elsa the doll for about six years. Then in December 2019, they decided it was time to let her to go. Into the outside trash bin she went.  End of story.

A few weeks later the doll was discovered inside a bench in the family’s living room.

“The kids insisted they didn’t put it there, and I believed them because they wouldn’t have dug through the garbage outside,” Madonia said.

However, the doll had come back changed: She was no longer bilingual. For some reason, she was only speaking Spanish this time.

Unnerved, the family once again sent Elsa packing and put her back into the garbage before they headed out for an extended vacation. They double-bagged the toy and put it at the bottom of the can. As an extra precaution they covered it with other trash so no one could take her out.

When they returned so had Elsa. A shocked Madonia wrote on Facebook:

“Ok guys, seriously, we need help. To recap for those of you who have not been following our Elsa doll saga, Mat threw it away weeks ago and then we found it inside a wooden bench,” Madonia wrote on Facebook. “Okay….so we were weirded out and tightly wrapped it in its own garbage bag and put that garbage bag INSIDE another garbage bag filled with other garbage and put it in the bottom of our garbage can underneath a bunch of other bags of garbage and wheeled it to the curb and it was collected on garbage day. Great, right? We went out of town, forgot about it. Today Aurélia says, ‘Mom, I saw the Elsa doll again in the backyard.’ <chills> HELP US GET RID OF THIS HAUNTED DOLL.”

The rational side in all of us says this must be a joke–someone is just replacing the doll with a new one– and that might be a great explanation, except for one thing:

“The doll has some marker on her from my daughter coloring over the years, so I know the doll that reappeared was the original and not a replacement. … Most logical thinkers believe it’s a prank, but I don’t understand how or when it was done, especially because the garbage truck had taken it away.”

In an extreme attempt to banish the stalking toy, the family sent it to a helpful family friend, Chris Hogan, in Minnesota. They did not include a return address.

“If the doll comes back, I might have to open my mind to some of the more supernatural solutions,” Madonia told the news station.

Hogan turned to social media with an update on the doll after receiving it.

“… and now for the rest of the story. She made it to Minnesota and is taped to the brush guard of my Jeep. If anything weird happens I’m welding her into a steel pipe and sinking it in Lake of the Woods,” Hogan wrote. 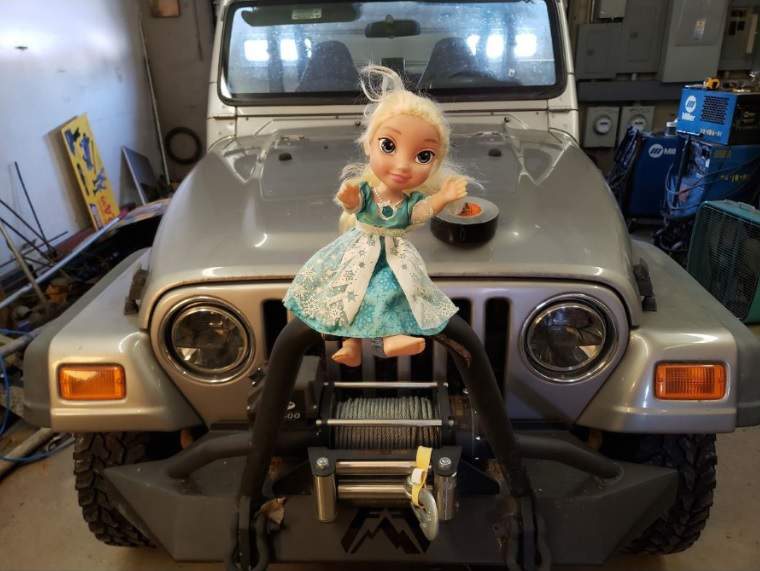 The saga of the “haunted” Elsa doll comes to an end in Minnesota. (Chris Hogan)–KPRC 2

Last month, Madonia offered the local news an update on the clingy Elsa doll when they asked if it had returned:

“No, she hasn’t come back,” she said. “We have had our fair share of weird things happening around the house though. Like doors opening and closing by themselves and lights/tv turning on and strange stuff like that. So it’s been interesting. But not the doll at least.”