“Ted the Caver”: Horror or Hoax?

Back in February of 2000 a man known only by the name of “Ted the Caver” embarked on a journey with his friend to discover what lie beyond the reaches of a small hole in the earth at the bottom of a cave. What they discovered is both bizarre and terrifying, also apparently true. Here is one entry from his journal as he describes an unseen presence from the bowels of the earth:

“It felt like a legion of demons was about to attack me from behind. I felt like my salvation lie ahead of me in the darkness, and Lucifer was behind me, trying to keep me from safety.”

“Ted the Caver” documented his trip into madness and made it available for the internet to read. The story is a popular legend that was reported on the pages of creepypasta.com, a site that encourages writers to submit their terrifying stories, true or not. What makes this story a little more believable is that the author created an extensive journal about his experiences, complete with pictures. His journal is a lengthy one, but documents each step of the journey with photographs and descriptions. “Ted’s” diary is rather long and descriptive, but it is this attention to detail that might give the most skeptical reader pause.

As Ted says in the beginning of his journal, “If you think these events sound far-fetched, I agree. I would come to the same conclusion had I not experienced them.”

You can read his entire journal here (all photos and entries for this article were taken from there), but be warned, the site is powered by “Angelfire” a free website hosting service that bombards you with a popup every time you click to the next page. But the annoyance is only temporary once you hit “close ad”.

If you choose to read Ted’s journal, it might take you a little while to get through the whole thing. Below is a synopsis of what it contains, but the entire journal is well worth the read if only to give credence to this bizarre story.

On February, 2001 friends Ted and B (names withheld for privacy), avid explorers, descended into a cave with the hopes of exploring it one last time. Ted had been fascinated by a hole deep within its passages and wondered if there was a way to get through it. The size of the opening was only wrist-thick, but the duo was determined to break through it and discover the mysteries that lie underground. As they sat beside the opening, contemplating what tools they would need, they heard strange noises coming from within, wind and rumbling that Ted surmises was the natural effects of ambient noises and the passing traffic nearby. Once the team decided what they would need to continue the excavation, they left, eager to return to begin the work.

Nearly a month later, armed with a cordless drill and sledgehammers, the two men returned the “Mystery Cave” and began the arduous task of making an accommodating crawlspace in to the rock. Their work continued for months with strange occurrences happening every step of the way. At one point, Ted explains, B was sitting near the opening and claims to have heard something strange, “He said that he swore he just heard a strange noise emanating from the hole. He said it sounded like rock sliding on rock. Sort of a grinding sound.” 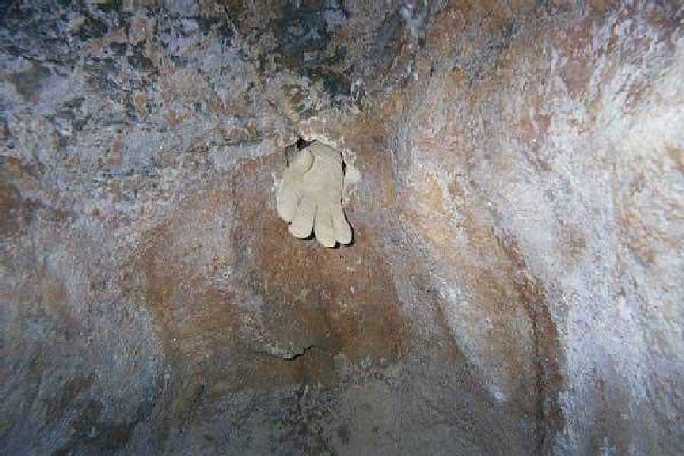 In the weeks to come the men hammered, picked and dug further into the opening, hoping to make it wide enough for them to pass. But as they did so more strange noises kept breaking through the darkness. Ted says there was one instance in which a loud scream could be heard even over the whir of his drill:

“It was loud. I could hear it over the noise of the drill, even though I had the ear plugs in. At first I thought it was just the drill bit doing its job on the cave. It would frequently complain by screeching and whining as we forced it into the wall. But this was different. It took me several full seconds to comprehend that this was coming from inside the hole, and not the bit. I stopped drilling and yanked my earplugs out just in time to hear the most terrible scream I have ever heard trail off and echo into the darkness of the cavern.”

Eventually through weeks of hard work, the men were able to create a hole big enough for Ted to squeeze through. Although his constant contortions through rough rock was exhausting, Ted was finally able to squeeze through the hole and enter a narrow passage that led into the abyss they called “The Mystery Cave”. 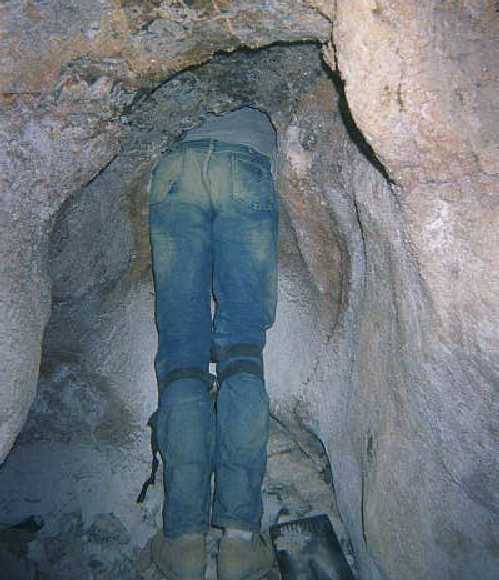 Ted can finally squeeze through the opening

Ted explored the rocky channels and openings of this new found tunnel, even able to stand in some places, but eventually he discovered he hadn’t been the first:

“On the left side of the room on the wall at about eye-level I discovered what appeared to be hieroglyphics! It was a single drawing that almost appeared to be just part of the rock coloration. It looked like very crude representations of people, standing below a symbol. I was pumped! This meant there had to be another entrance to this cave.” 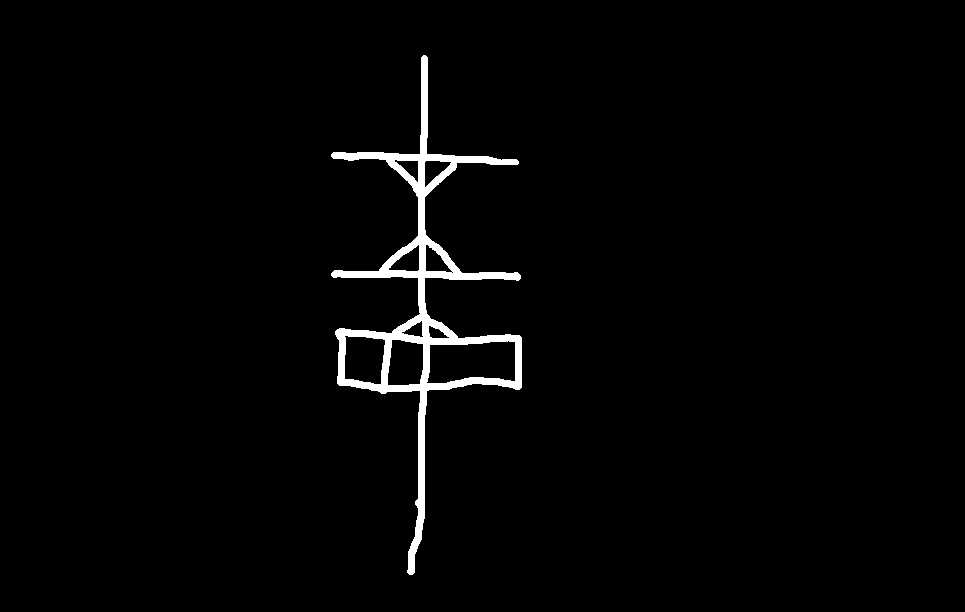 Ted’s drawing of the symbol he found in cave room

After his discovery, Ted exited the cave assured that he had enough photographic evidence to show B who had been waiting patiently at the entrance for his friend to resurface. Most pictures came through, except for the ones that detailed the room he had found.

Wanting to share his discovery, Ted searched for a person that would be able to confirm his and B’s discovery by climbing through the passage himself. That person was “Joe”. Once there, “Joe” managed to climb through the opening and disappear into the darkness of the cavern, but he quickly emerged and remained silent about his experiences in the tunnels. Ted explains Joe’s odd behavior:

“Once we got outside the cave,” Ted writes, “I figured we would be able to find out more from Joe. But when he got to the final climb he just unclipped from the rope and went straight to the truck. In the light of day he looked even worse than in the cave. B and I gathered up the rope and our gear and headed for the truck. Joe said he did not want to stay overnight because he felt terrible (and we believed him), so we headed home. We could get no more information from Joe. He just stared straight ahead. He was shaking like a leaf, and he said he was not cold. When we tried to question him, his answers were short. I asked if he saw the hieroglyphics. “No”. Did he hear us yelling? “No”. Did he see the round rock? “No”. Did he see the crystals “No”. He said he just went a little ways in and started to feel sick. Something was fishy about his answers. He would have had to have seen the crystals if he got far enough into the cave that he couldn’t hear us yelling. But why would he not elaborate?” 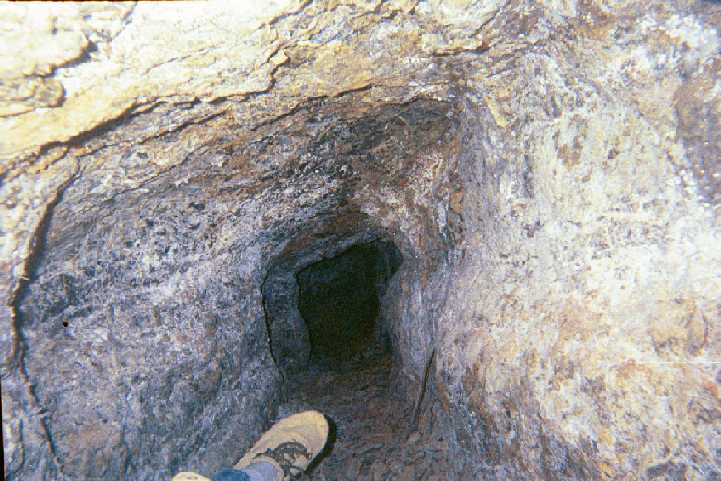 What lies ahead for the Caver?

Ted would eventually return to the cave two weeks later and experience his own terrifying journey through it. In his journal he explains that as he traversed through the tight corridors of the tunnels he heard a “scraping noise”. Ted describes the sound, “It was loud. It was close! It was coming from the large room I had just left. I wheeled around to face what ever had made that noise. When I did I lost my presence of mind and stood up at the same time. Crunch! My helmet crashes into the passage ceiling. My light broke and I was buried in the heavy darkness.”

Through this ordeal, Ted explains that a putrid smell began to fill the halls of the cave, “It smelled like damp, rotting, rancid, putrid, DEATH!” Ted began to use green glo-sticks to light his way through the tunnels and discovered large boulders had been moved from their original positions, revealing other channels deep within the passage. Through time and effort Ted final began to make his way back to the light of day, but not without hearing noises following up behind him and something trying to pull his ropes back into the darkness. 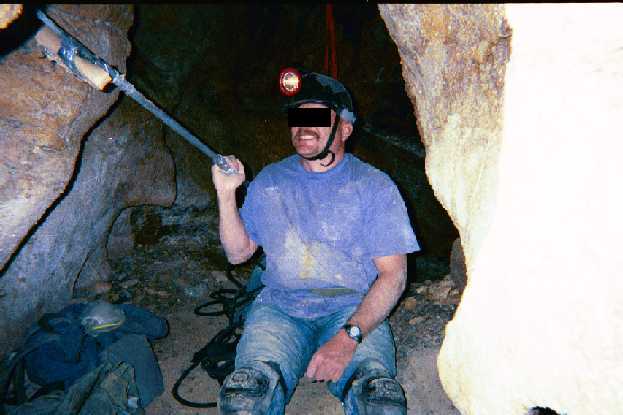 Shaken and in pain, Ted emerged from the ground and he frantically cut the ropes from Ted’s body. They traveled home in silence and Ted would soon have nightmares. These dreams would compel him to return to the cave, saying in his journal that “closure” was what he needed.

The last entry into his journal on May, 19 2001, ends with him saying, “See all of you soon with lots of answers. Love, Ted.” The website states that it was last updated on that day. Nothing more has ever been heard from Ted the Caver.

Could this be a hoax; an urban legend or a simple case of creative writing? Perhaps. But why would someone go through so much trouble to take pictures and document the experience so vividly? After 14 years, one would think that Ted would emerge from obscurity to take claim of his discovery and possibly get some sort of recognition on his celebrity. So far that hasn’t happened. All that remains is a journal and a few snapshots. What happened to Ted?

Let iHorror know what you think about “Ted the Caver”.

All photos and journal entries from Ted the Caver website.

New Concept Art Reveals the ‘BioShock’ Movie That Almost Was