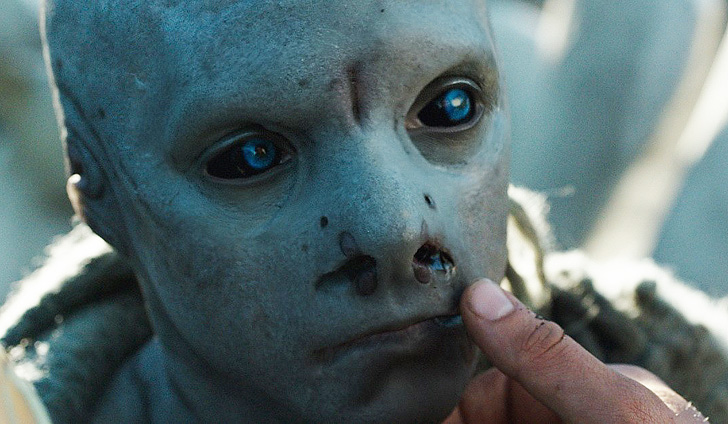 Personally, I didn’t want to use a picture that reveals so much of the titular creature. I prefer not to spoil anything for the reader. But, after viewing the trailer I noticed that whoever cut it had no shame in spoon feeding the entire film to the world, which is really unfortunate. Trailers are far too long and revealing in contemporary culture.

I believe that if you can’t make an exciting, catchy or awe-inspiring trailer without spoiling the entire movie, then you shouldn’t be cutting trailers. They’re seriously doing their fans, and themselves a disservice. That being said, if you’re intrigued and don’t want anything spoiled for you, I would avoid the trailer below and just wait until the film is released on VOD, June 1st.

On the edge of the Antarctic Circle, in the years after World War I, a steam ship approaches a desolate island far from all shipping lanes. On board is a young man, on his way to assume the lonely post of weather observer, to live in solitude for a year at the end of the world. But on shore he finds no trace of the man whom he has been sent to replace, just a deranged castaway who has witnessed a horror he refuses to name. The rest is forest, a deserted cabin, rocks, silence, and the surrounding sea. And then the night begins to fall…

At first glance Cold Skin may seem like just a bizarre combination of At the Mountains of Madness and The Shape of Water. But, there exists an underlying social commentary inspired by the philosophical idea Manifest Destiny: The concept referring to the 19th century U.S. territorial expansion, excusing the genocide and numerous horrors that afflicted the native inhabitants of the Americas. Declaring, the United States was destined by God to expand its dominion, democracy, and capitalism across the North American continent.

The character Gruner, played by Ray Stevenson declares in the trailer that humans are invading the creatures territory, explaining the beasts relentless nightly assault. Gruner reveals that he plans on exterminating the humanoids. All the while the character Friend played by David Oakes is falling in love with one of the creatures. The very same creature that Gruner has domesticated to satisfy his own personal desires. Leading to an inevitable conflict, that will only end bloody…