I’m glad I waited this long to finally watch Wes Craven’s New Nightmare. Listening to movie podcasts (specifically those that focus on horror) for the last few years has helped me approach cinema with an analytical edge that I never had before.

I wouldn’t have been able to comprehend a meta-horror film such as this or others, like the Scream franchise (also directed by Craven) or The Cabin in the Woods by Drew Goddard properly.

I had to watch this movie four times within the last month just to be able to process the heavy material.

At least with Scream and others, the characters are aware of horror films as well as the rules or cliches that define them. But, they’re unaware of the fact that their reality is governed by these rules (except for Randy) or that these rules can be twisted and even broken.

In New Nightmare, the characters are the actors (playing themselves) so not only do they have access to the horror genre and the rules–but the rules and the tropes that are unique or specific for their own franchise (A Nightmare on Elm Street) in a world that is basically our own, albeit a little more movie manufactured.

This knowledge grants the characters potential foresight, while in turn dismantling whatever conventions or expectations the audience may have.

That being said, Scream is arguably the quintessential meta-horror series in cinematic history.

A series that not only: revamped the slasher genre for a new generation and for many generations to come–bringing the sub-genre out of obscurity and into the mainstream (much like Halloween did in 1978), and unwittingly created a horror movement that would carry through the 90’s and well into the millennium.

Strangely enough, New Nightmare predates Scream by two years, but no one ever talks about it or the radical ambition behind this unique feature and the monumental impact it had on the genre.

It stands alone in terms of its concepts and execution. Craven essentially treated this feature as a blank canvas for this experimentation in film making, witnessing firsthand what works and what doesn’t in terms of metafiction.

As a result, by the time Scream came along, Craven and Kevin Williamson were able to nearly perfect the idea.

Neither of these films are the first to go meta–that title probably belongs to Peeping Tom, which is also the first slasher I believe (it’s debatable).

But, without them we wouldn’t have any of the self-aware brilliance that has come along since they first terrorized our feeble minds on the big screen.

“Reality and fantasy meet in unsettling ways in this installment of the long-running horror series, which finds director Wes Craven and actors Heather Langenkamp and Robert Englund all portraying themselves. As Heather (Heather Langenkamp) considers making another film with Craven, her son, Dylan (Miko Hughes), falls under the spell of the iconic disfigured villain Freddy Krueger (Robert Englund). Eventually, Langenkamp must confront Freddy’s demonic spirit to save the soul of Dylan.”

New Nightmare is a great film and truly unique, but it’s not perfect by any stretch. Craven appeared to write himself into a corner with his extensive and ambitious concepts.

I had a difficult time discerning Freddy’s abilities in the real world. He could obviously effect his victims in the same way in which he did in previous films (if you die in your dreams, you die for real).

He could also appear when the characters were awake, like in the scene where he comes out of Heather’s closet (an awesome sequence) and slashes her arm.

But he retreats when an earthquake begins to shake the house–this earthquake however, turns out to be isolated to Heather’s house. Where did he go? Does Freddy have limited amount of time while in the real world? It’s safe to assume that he wasn’t frightened by the quake.

Shortly after that scene, her son Dylan is given a shot from a nurse to “help” him sleep. Despite his babysitter Julie’s best efforts to keep him awake, he dozes off for a second and Freddy is able to manifest and brutally murder her.

But, nobody can see him, as if all of this is taking place within a dream (a dream that Julie would have to be in) for this to make sense.

Following Julie’s death, Heather claims that Dylan sleepwalks and can easily leave the hospital on his own accord. Does this mean that as long as he (or any of them) are asleep, Freddy can treat the entire world as his playground with unlimited power?

As brilliant and mind bending as these scenes are, they leave much to be desired in terms of explanation and reason.

This is something that I have noticed throughout the Nightmare franchise: directors or screenwriters have a difficult time keeping up with continuity and establishing concrete rules for the dreamworld as well as “reality” and the complex relationship between the two.

I believe the logistics get tossed aside in favor of keeping profound or groundbreaking scenes and effects, or they just simply get lost in the shuffle.

It’s a bit of a catch-22. If hard science was applied, we may not have these iconic scenes from the franchise: Tina getting dragged up the wall and gutted, Freddy’s glove breaking the bathtub water, etc., but they lose a bit of credibility and points with critics due to their lack of continuity or coherence.

To be fair to critics, the glove should have vanished instantly when Nancy woke up instead of retreating below the depths from whence it came. 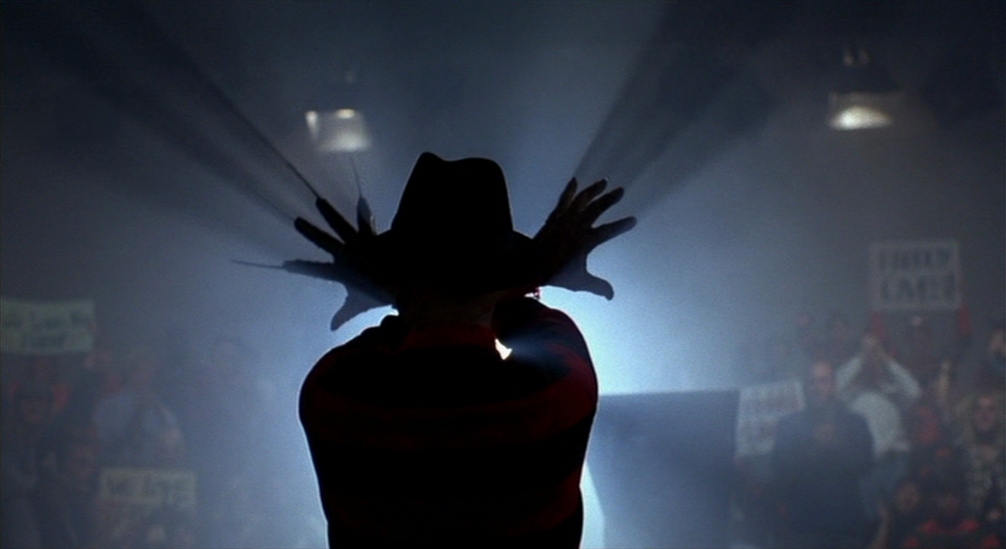 I greatly appreciated Craven’s thought to include a scene with Robert Englund in Freddy’s classic makeup and attire, so that when the real Freddy shows up we can visually discern the major differences between the two different iterations.

The new and improved Freddy is bulkier, with clean and sleek clothing–including a black trench coat, black military boots, and leather pants.

His makeup is significantly different, resembling an anatomy dummy of a human’s muscular structure, his glove has become a part of him and includes a fifth bladed appendage.

I adore his new look, he is very intimidating. Its a shame that the rest of the franchise doesn’t include this variant–maybe in a future remake, reboot, re-imagining or what have you.

The cameos were a nice touch: Bob Shaye, Wes Craven, Lin Shaye, Robert Englund. They helped ground the audience into the reality.

But they were undermined or undercut by some pretty poor performances and some super cheesy and on-the-nose dialogue.

The ending setting was brilliant, Heather accepts that she is going to play Nancy one last time (the new nightmare film) Freddy’s dream lair was like hell.

A bleak and smoldering cathedral of nihilism, very aesthetically pleasing.

Although I did appreciate the setting, the way that Freddy “dies” is super confusing and I think pretty lazy.

One of the recurring rules throughout this franchise is that Freddy cannot be harmed while in the dreamworld, but in New Nightmare, he gets stabbed and carries a limp, and burns to death (again) in his own world. It just seemed rushed, and pretty unsatisfying.

This movie is definitely worth the watch. It’s criminally underrated as an Elm Street film, a horror film, and as metafiction.

It used to be on Netflix for the longest time, but now you may have to rent it at places like Amazon for three bucks–it’s worth the cost.

Embark to the Upside Down with Telltale Games’ ‘Stranger Things’ Game