Late to the Party: ‘Bone Tomahawk’ (2015) – Reveals There are Fates Worse Than Death

Bone Tomahawk was S. Craig Zahler’s directorial debut, and only second feature to his credit at the time of its release. Zahler is the primary screenwriter for his films and was even the composer for three of them.

I didn’t get around to watching this movie until about a year after it was released, which is strange for me considering I love westerns and I (obviously) love horror. Bone Tomahawk has received nearly universal acclaim for its acting, story, and direction. Even winning multiple awards such as the critics award for “Best Picture” and “Best Director” upon many others.

Via Den of Geek

The LA Times, claimed “There’s a humming genre intelligence at work in the grim, witty horror-western Bone Tomahawk.” and my personal favorite from The Hollywood Reporter “a handsome western with horror overtones.”

Yet, the film was rewarded with only a month-long run in select theaters. This seems like a tragedy, but to be fair, this is definitely not a movie for everyone.

Those who appreciate westerns may be repulsed by the level of violence, specifically when it involves the cannibals. But, don’t worry, there are plenty of beautiful tracking shots of the scenery, and genuinely funny frontier banter.

There are a couple of quick moments of genuine horror thrown-in, but it’s not until the climax when our heroes reach their final destination that shit gets really twisted.

Purvis (David Arquette) a killer on the run, heads to the small town of Bright Hope, prompting deputy Chicory (Richard Jenkins) to report the stranger to the Sheriff (Kurt Russell), which leads to an altercation.

In the dark of the night, we discover something sinister has been following Purvis’s trail, leaving Bright Hope vulnerable and unprepared.

In the morning, after the discovery of a murder and multiple abductions. The Sheriff calls for a meeting in the saloon. A local Native American recognizes the arrow they found near the body, claiming it’s unique to Troglodytes a clan of highly aggressive and skilled killers without a language… 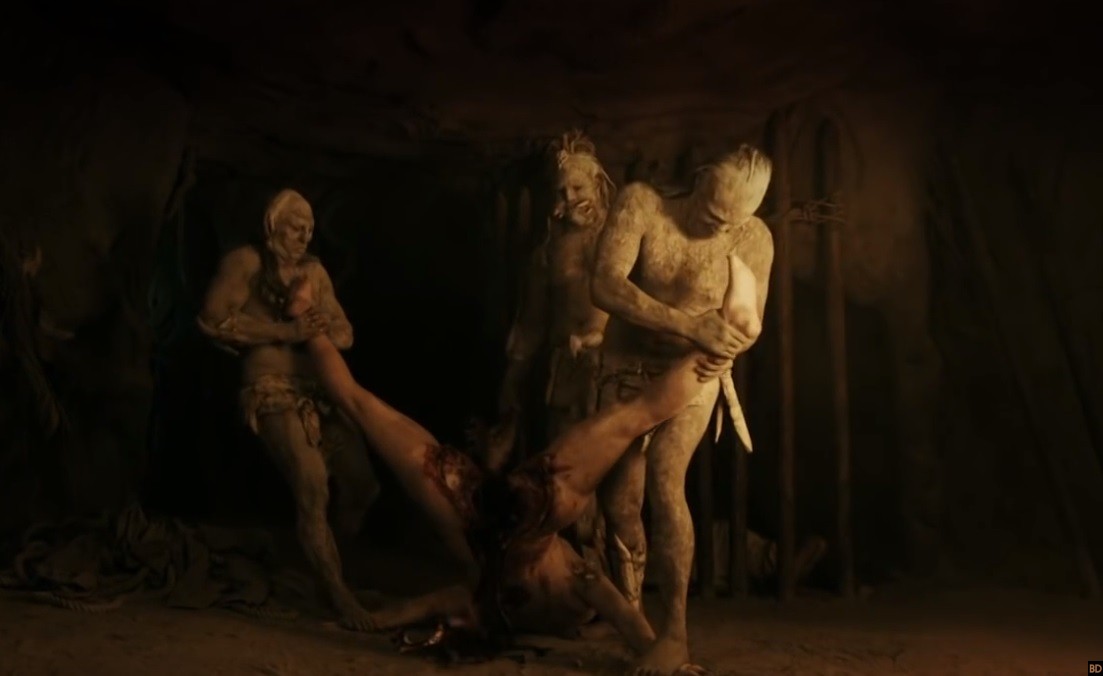 Bone Tomahawk is a slow burn, but it’s never a chore. We spend time with the characters, and get to know what makes them individuals, so when tragedy strikes we care about them. They aren’t just cannon-fodder, they’re real people that we can relate to.

The cannibalistic Troglodytes are genuinely intimidating. We learn a little about them in the first-act that sets up our expectations. They’re described in essence, as brutal killers. The Native American who the townsfolk refer to as “The Professor” warns the Sheriff, that pursuing the cave-dwellers means certain death for his rescue party.

This was an understatement.

When we meet the cannibals, we discover they’re relentless and efficient. Quickly disarming our heroes, in more ways than one as Brooner will discover. The most disturbing scene in the movie, and one of the most horrific deaths I’ve ever seen ever, takes place with deputy Nick (I won’t spoil anything, but it’s messed up).

The primitive cannibals are portrayed in such a monstrous way, that we hate them by the end. There is no sympathy for their continued existence from the audience. We long for their extinction.

The heart of this movie is most definitely a western. The plot is pretty standard western-fare (a rescue/revenge mission). But, the big difference is the diverse characters who are elevated by the actors outstanding performances.

The score is so discreet, scenes of violence become hyper-realistic and disturbing. The realistic gore accompanied with the performances, makes for unforgiving tension and gut-wrenching suspense.

I personally adore Bone Tomahawk. It’s my favorite western, and one of the best horror films of 2015. A list which includes; Green Room, The Devil’s Candy, The Invitation, The Witch, Crimson Peak, Krampus, and Stung to name a few.

If you haven’t seen any of these… why are you still here? Go–go watch them! Return when you’re worthy.

Via Den of Geek

Bone Tomahawk (and Brawl in Cell Block 99) can both be streamed for free with Amazon Prime.