With Tremors: A Cold Day in Hell coming in May this year, it’s important to remember the first installment that started it all. Cold Day in Hell is number six in the franchise of the under-dwelling Graboids and features returning cast member Michael Gross as Burt Gummer. But let’s rewind to the sleepy rural town of Perfection, Nevada where something stirred beneath the ground in 1990.

Tremors started out with some baggage. Not a lot of movie goers were ecstatic about another B-horror movie, or a campy creature feature. The prehistoric worms did not get a big audience or theatrical run. Instead, the film became a popular hit on the home video market.

This was back when you could stroll into a Blockbuster or Hollywood Video and drool over the selection of movies. These times were great because you actually held something tangible in your hands. You longed to race home and shove that VHS into the VCR and enjoy the show. The film lassoed the loss at the theaters and tripled its box-office numbers with the home rentals and movie sales.

Another detail that caused strife was the fact the MPAA rated it R. This rating was not for gore or violence, but for language alone. Over fifteen F-bombs were scattered throughout the film. When it was edited down to Pg-13, it made the film campy. A favorite among fans is the line “Motherhumper.” Pardon my French indeed, Mr. Ward.

The film opens with Valentine (Kevin Bacon) and Earl (Fred Ward) as two handymen, which go about the town of Perfection doing side jobs. The film paces nicely, letting the viewer get a taste of the town’s people and the surrounding area. You start to realize just how cut off these people are from the rest of the world.

As Val and Earl set off to leave the town, they soon realize they’re too late. Bodies of the townfolk start to stack up. Even though the film has a comedic tone, these scenes are still frightening. Almost everyone can recall the farmer’s decapitated head in his garden, or the runaway jackhammer.

The two men rush back to the local convenience store to disclose their findings. At first, the residents of Perfection don’t believe them, but they could not deny the evidence dragging behind Val’s axle on his truck.

The friends set off on horseback, hoping to find help for their tiny town. They enlist  fellow seismologist student Rhonda (Finn Carter). The three don’t make it far when they encounter a much larger tentacle like creature. A thirty-foot Graboid! In a race for their lives, they discover the creature can’t penetrate solid rock and head back to the store with their new information.

The residents of Perfection assemble back at the store, trying to find a solution to these monsters. With more than one of these giant-like worms attacking their town, their fate seems grim. The attacks from the Graboids are relentless.

Here is another iconic scene where Rhonda is tied up in a jangled barbed wire fence. Trying to save her, Val tells her to remove her pants and the two retreat back to safety… but not before the Graboid gets an axe to its outer shell and dismantles the porch of the store.

The people of Perfection climb the tops of their homes and buildings in an attempt to hide from the monsters. They hope the worms will grow tired of waiting them out.

A Graboid barrels into their basement. Little did the creature know what it had gotten itself into. The basement is the sanctuary of the Gummers, where all their precious assortment of guns are held.

The lovers pack a punch and end up killing one of the ancient worms, in what was one of the films greatest scenes. Perhaps Perfection can go back to its namesake?

Unfortunately, these monsters are not your average dirt worm to be shot to death or pole-vaulted over. No, these creatures are getting smarter by the minute.

Earl and Val decide the solution is to drive a bulldozer, hooked with a trailer, towards the surrounding mountains. They think the creatures can’t devour something that heavy – having already established that the monsters can’t go through solid rock or earth.

Their drive doesn’t last long, and the remaining survivors become stranded on an island of rocks. With the Graboids circling beneath the loose dirt, Val and Earl make one final stand against the monsters.

While it’s necessarily a horror feature, Tremors was one of those rare films that handled comedy and horror synonymously. Bacon and Ward steal the show, but the effects department certainly made the movie shine.

The design of the Graboids was different, something no one had seen before. When the jaws open and the tentacle like tongue gushes out, you squirm in your seat.

The idea of worms as the antagonist also seemed like a bold move for a film with this many stars. The film closes with Val doing a final battle with the famous line “Can you fly you sucker!”

All in all, Tremors is good, goofy, groovy fun. The horror is there, but along with it is a film that stands out amongst the barrels of B-movies in your local Walmart five dollar bin. Probably for most 90s kids, this film did for them what Jaws did for the water. In fact, even the poster mocks the famous Jaws image. 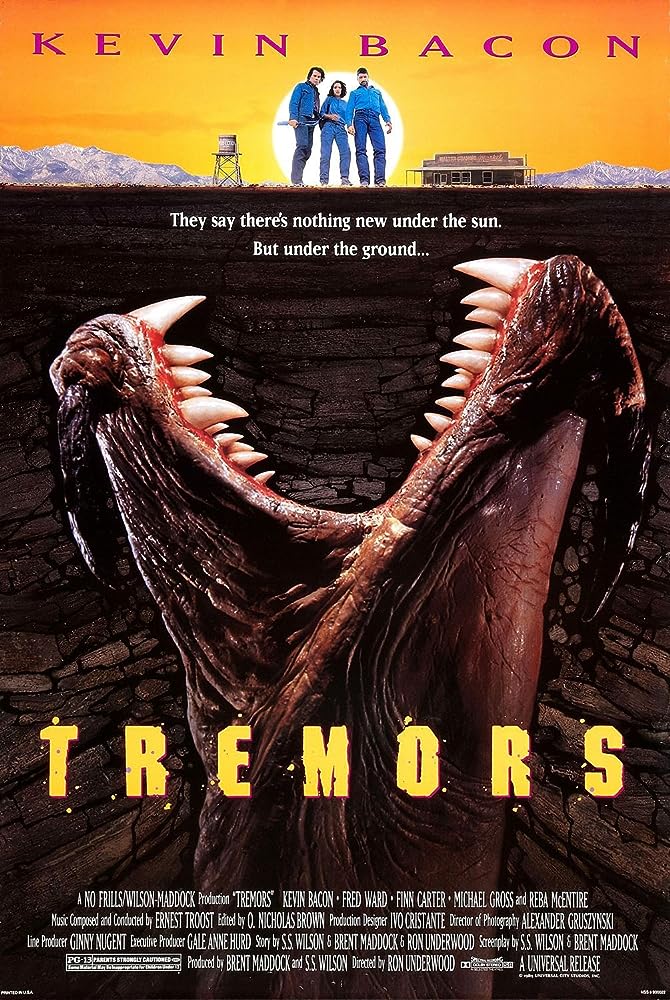 With so many sequels (you find out they can fly; they develop the names Shrieker and Ass-blaster) and even another TV series rumored to be in development, it doesn’t look like these worms can be forever buried just yet.