The amount of times I’ve seen 1985’s Re-Animator is insurmountable. It’s a staple in any conversation of greatest horror movies, whether or not we’re speaking Lovecraftian films or just flat-out greatest horror movies. The general consensus is that the film is amazing, and I can attest to that. But what about the sequel?

In all of my years of watching, reading, or finding any other possible way to consume horror, I’ve not heard much about Yuzna’s sequel to the film. Bride of Re-Animator, released four years later in 1989, has passed by generally undetected for a very, very long time. Despite this, Bride is actually an astounding display of gore and terror. It has its own unique set of quirks, and the tone is substantially different from the original. While they’re both different, they work very well as companion pieces to one another.

Jeffrey Combs and Bruce Abbott return to their respective roles as Herbert West and Dan Cain. West is up to his old tricks once again and plans to reanimate the perfect woman. Using the heart of a dead lover of Cain’s, the results are, as one may imagine, disastrous. All the while, the two scientists are being pursued by both the head of Dr. Hill and a detective hot on their trail. To make matters even more complicated, the irresistible Dan Cain has gotten involved with another woman who is oblivious to the insidious experiments being performed in the basement of West and Cain’s house. What could possibly go wrong? 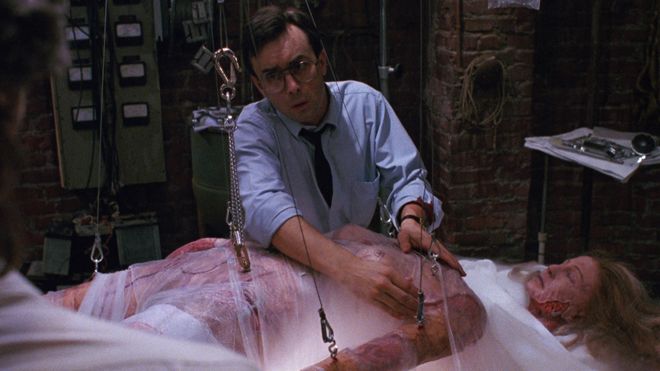 The effects are top-notch, as one would expect in a sequel to such a phenomenal film, and there are more than a few scenes which are cringeworthy – but I mean this in the best of ways. The sequences which involve the titular bride, in particular, are stomach-churning. Her body, a mutilated amalgam of discarded human body parts, is a much more gory version of the unforgettable Elsa Lanchester in Bride of Frankenstein (1935). The film almost serves as an updated version of the 1935 film. It once again reiterates the point that maybe man was not meant to play God after all.

Bride of Re-Animator finds its true strength towards the end of the film when the re-animated shit begins to hit the proverbial fan. All of West’s experiments are unleashed at once after being discarded as rejects. They are monstrous, disfigured, confused, and angry. In a fearful display, the end result is what one may imagine the darkest depths of Hell to look like. Oh, and there’s also this little guy: I can offer quite a few reasons as to why I believe the sequel seems to be so under appreciated. One is that the first was so quirky and original that anything less than astounding would be sure to be buried underneath the weight of its predecessor. A genuine horror comedy, Re-Animator was darkly silly while reaching levels of blood and surreal gore rarely seen in cinema before. Bride of Re-Animator lacked a strong humorous component. While it still was very much a goofy movie, it was much more subdued. From start to finish, it plays as a much more tongue-in-cheek affair than the first film.

Jeffrey Combs seems much more sinister in this film. Beyond curiosity, West no longer seems to have the slightest regard for the life he is reanimating. The lives he ruins in the process appear to be nothing more than collateral damage. This is illustrated perfectly in the beginning of the film when Cain and West are seen volunteering in a foreign civil war as doctors. Except, instead of tending to the wounded soldiers, West uses the bodies as raw material for his experiments. It’s a bizarre introduction with not much explanation and serves only to help create a bizarre tone for things to come.

Though I am quick to praise the film, I would be lying if I said that Bride of Re-Animator was as groundbreaking or simply entertaining as its predecessor. It’s a great film – especially the dark descent into madness at the end – but much like The Exorcist, nothing that follows could ever compare*. It’s an uphill battle that can never be won. Still, it’s one that’s worth mentioning, and a double-feature of the two films would make for a very fun and extremely gory night in.

*no, I’m not talking about The Exorcist 2, ya dummy. That movie sucks. The Exorcist 3, though? Now we’re talking.