If you’ve been watching horror films for a while, you’ve undoubtedly seen your share of strange ones. But one of the strangest and most bizarre is also one that is often overlooked. To the initiated, you may have already guessed where I’m going with this. One word: Society.

Brian Yuzna’s 1989 directorial debut is the cream of the crop of bizarre horror films. It’s unsettling, campy, but most of all, gooey. How many films can you describe as gooey? That, in my book, is a victory in itself.

In Society, Yuzna attempts to make a statement about the wealthy in America. Jean-Jacques Rousseau once said that “When the people shall have nothing more to eat, they will eat the rich.” However, Rousseau was not alive during the end of the 19th century, and filmmakers like Yuzna had come to think the opposite.

The film is about the Whitney family, but more specifically, Bill (Billy Warlock). His family is obscenely wealthy – excessive, plastic, and phony – and Bill feels completely out of place. He feels like he doesn’t belong in the family, which leads to him considering the fact that he may be adopted. His sister, Jenny (Patrice Jennings) seems to have an incestuous relationship with their parents – and maybe a sexual one with the entire group of wealthy homeowners in their neighborhood. Whatever it is, it’s not right, and it’s taking a toll on Billy’s mental health.

When begins as an odd mystery film with tinges of horror reminiscent of David Lynch eventually swallows itself whole and regurgitates itself, giving birth to the most insane thirty minutes of cinema that I have personally ever seen. It’s not particularly gory, but it absolutely is disgusting. It feels much like a Cronenberg film that’s gone completely off the rails to the point of no return – and, on that note, I applaud the film for doing just that. Once it gets weird, you’re stuck with it.

I would love to say that the movie works well in both areas of the story – the mystery and the strangeness of the ultimate, shocking reveal – but speaking honestly, the shock factor heavily outweighs any of the serious aspects of the film. The acting isn’t particularly earth-shattering and the storyline is so predictable that I don’t even think it’s possible to spoil anything, but the end sequence (which is called “the shunting”) is almost indescribable in terms of gross weirdness. And while it may seem funny, there’s something extremely disturbing about this movie. Bodies are contorted and bended and melted and stretched in ways that defies logic. If the imagery doesn’t make you even a bit squeamish, you should probably see a therapist. 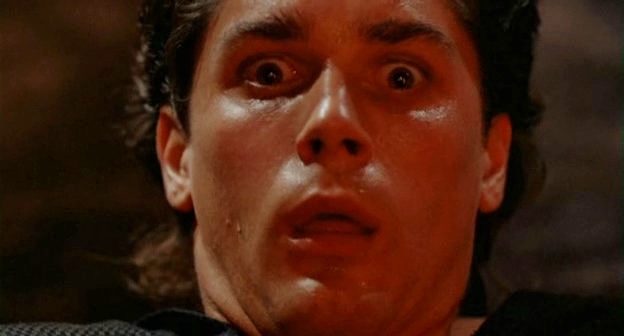 The goal of this article isn’t so much to analyze Society as it is to simply educate you on why you need to see it. Simply put, it will test the limits of just how much strange you can handle in a film. I won’t spoil what exactly happens – that would take the fun out of watching the movie, wouldn’t it? – but I can beg. I can plead. You need to watch Society. You need to know just how weird horror can get. If for nothing else, Yuzna’s film deserves a watch because of Screaming Mad George. Yes, that’s in the credits. Look it up if you don’t believe me.

So go ahead. Put it in your queue. Rent it, or borrow and old copy from a friend. Whatever you do, just find a way to get your hands on it…but be careful not to get too close.

I mean, where else are you going to be able to find a talking ass like this?