Mother Nature has a way of working things out in the cycle of life; sometimes in the most gruesome ways.

Take for instance the heron in the picture below. The bird, according to the New York Post, swallowed a snake eel whole.

The eel used the sharp end of its tail to cut through the bird’s stomach, mid-flight, and emerge back out into the world. Davis at first thought the eel was attached to the outside of the heron, but when he looked closer he discovered the creature had burst through its stomach.

“I could see the eel. You could see its eyes,” Davis told Live Science. “It was actually coming out the other end.”

For horror fans, the sight most likely brings back memories of the Alien franchise when other-worldly parasites burst from the stomach of their hosts. 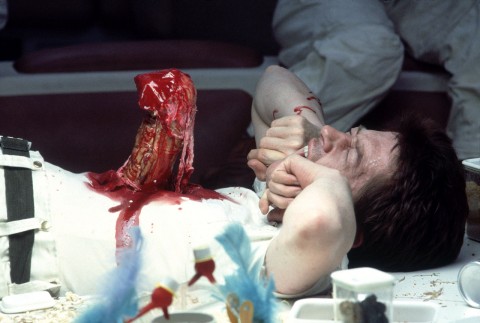 The fate of the bird, unlike John Hurt’s character in Alien (1979), remains unclear.

“The heron didn’t seem to act much differently,” Davis told Live Science. “It was in the water and flying around.”

The creepy photo was actually taken by Davis in 2011, but he recently shared it with a nature publication.

You can see more photos of this strange phenomenon by clicking HERE.