Corin Hardy Discusses Seeing Ghosts on Set of ‘The Nun’

Seemingly haunted movie sets are nothing new, yet everytime news breaks of another one being added to the list is always exciting. Corin Hardy, director of The Nun, told CinemaBlend about a strange encounter he had on set, fueling anticipation for the upcoming film.

” We were shooting in a real Romanian fortress, you know, ancient, it was used to store weapons… like an old bunker. Pitch dark tunnels you could get lost in. So when we shot this sequence… it was called the corridor of crosses, it was a two hundred foot long corridor, deep, dark, dank, dripping wet… Where I was situated, I had to be out of camera shot … so I was in one of these cells… literally a door from the corridor into a pitch black room. There’s no way out behind it … I see these two guys from the crew, probably sound department, just sort of sitting back a little further in the dark and I said hi … I was focused on the film. I turned my back and sat with my back to these two guys. And I was watching the monitors, we were running the tapes …

Half an hour later I’d been sitting there in this darkness … I finally got the shot…I got up and I turned to the two men and I said, ‘Ah! Did you see that?’ And I turned around and… there was just no one in the room. And there hadn’t been anyone in there at all. There’s nowhere they could’ve come out of … I saw them on the way in. I just felt that they were there the whole time. ”

So what does he think happened?

I can only assume that they were probably like Romanian soldiers…. a couple of dead Romanians watching over the filming of The Nun.

By the way, he prefaced this by saying he’s not a very good liar, so take that as you will.

You can watch the full interview below. 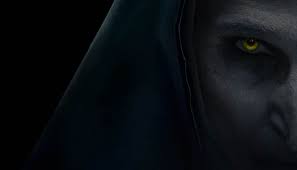